skip to main | skip to sidebar

Mike Webb begs the question: "Can I shoot 'em?" 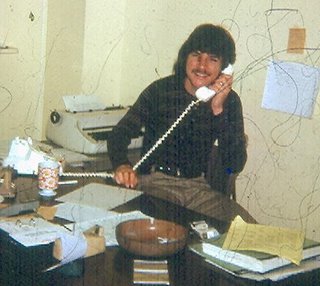 Mike Webb? What's all this, then?

Alright, a quick recap - skip the itals if you know the backstory: Mike Webb is former 10 year talk-jock vet at KIRO. A left-leaning liberal of sorts, but never mentally stable/sharp enough to help push the progressive movement wagon forward. Thanks to progressive blogger extraordinaire Blatherwatch's Michael Hood, we all followed Webb's downward spiral into oblivion - culminating in December 2005 (of sorts) when Webb was charged with insurance fraud, and then promptly sacked by KIRO.

As mentioned, this is the quick recap. For the unabridged version of all things Webb, you would be wise to visit blatherwatch's detailed Mike Webb file, or Geoff Parish's expose' "Tangled Webb".

So when I last visited the "Mike Webb file", I also discovered the heading "Mike Webb trial finally begins Thursday!" (07/27/06). Hmmmmmmmm... Thursday. Not much on the personal docket that day.

Arriving at 9:45am at the King County Courthouse outside room E-733, I link up with Michael Hood of blatherwatch - a man who hears every flea-fart in NW radioland - and we prepare for Webb's entrance. I had seen Webb before at a KIRO "battle of the talk show hosts" event, but not long enough to talk to him or take a photo, so I really didn't know what to expect.

Webb turns the corner - a literal behemoth of a human being (the ol' radio/visual disconnect shock)- & I start snapping off a few photos. (Note: I am SERIOUSLY in need of some digicam assistance/tutoring). Webb immediately raises his briefcase - not unlike a perp-walking corporate schill - & passes us by. I tried for a few more clicks, when Webb turned to me and says:

"You know, you're a real asshole!"

I know, huge dis right? Would've cost him a cool 350K on KIRO, but not so much as a dent here. I'll check with Hood, but I may have shed a tear.

The court proceedings are fairly uneventful - mostly trial/vacation scheduling issues (seriously). Well, I should say uneventful aside from a few Mike Webb over-the-shoulder bellers toward the gallery (occupied soley by Michael Hood & yours truly). My favorite, looking in our direction:

Duly noted. Did the stenographer pick that up? Actually I take that back. That was my favorite Mike Webbism until defense attorney Mark Larranaga got up to leave & directed Mike "Don't talk to anyone, okay?". Webb's response?

OH YEAH! Judge Spector did ask if Webb's attorney would be bringing character witnesses ("No"). To which the Judge responded:

"Alright, so there will be no mention of Mr. Webb's good character"
*Chuckles, guffaws, & sniggers from gallery*

I know I know, this was just legalese , but still hit us both in the coffee-spit mechanism.

The trial day finally winds-up much how it began: a few motions of which no one will object; a few other motions that are too thick & get punted. Yawn. I start to warm-up the digicam. Mike Webb notices this, whips out his cell phone, & starts taking a few photos of his own inside the courtroom. I wave & ham it up a tad.

And then the fireworks really crackle. Outside the courtroom, I try to reciprocate with a few more candid shots - Webb does the suitcase perp-walk again. But then as he gets in close, Webb grabs for - and runs off with - my camera. Both Michael & I shout about this, & Webb tries to dunk it in the nearest recycling container (failing).

Note: This whole time Webb's attorney Larranaga is exhorting him - much like a mother with a child: "Mike! Mike! STOP THAT!"

Webb & attorney turn towards stairway door & scramble through. I attempt to follow, but Mike Webb - former KIRO News/talk personality - has decided to play a game of push o'war with the door.

Webb finally releases the door, and I fly through - only to face-off with him once more. Well actually, the truth is that the liberal, progressive, & tolerant Mr. Mike Webb backs me up into a corner & proceeds to spout-out a few dozen more FCC 350K words. It was quite Cheney-esque. I responded with something about my 1st amendment rights equaling his - you know, a progressive backbone phrase - but it didn't seem to matter.

But fear not, folks. Coming again on Tuesday - August 1st, 10:30am in Room E-733, I can just hear the barrage starting anew from the depths of those hallowed halls - as the Mike Webb insurance fraud trial rolls on.

Yes ASAP. Again, as I noted, for all the hustlin' around & push-o-war with the door, all I got was a Briefcase covered Webb.

Kind of a fish out of water with these new fangled digi things, and just wasnt cooperating with me that day. Mike should have just posed for it & gotten it over with

goddamit nate, I thought you were kidding when you told us you were going to go hassle this dude! SHEESH!!! heeeheee

...clear calendar for me and MY digi.

Maybe we can have fifteen or twenty people show up for photos. that should really spin Webb's head. lol

And trust me, no matter how much he tries to hide his face, I can get a lot of shots off without him even knowing.

Anonymous said...
This comment has been removed by a blog administrator.
3:15 PM

Nate: The efforts of you, Brian, Travis, Hood, and others in trying to attack people within the radio biz with blogs, photos, and whatever else, will ultimately fail, because programming decisions are made based on ratings, talent, personality, and longetivity within the biz, and not from unsubstatiated comments found on blogs. I suggest that if you are truly interested in news talk radio, that you consider interning with a talk host, that you consider promotions work for a news/talk station, or, that you consider a CC or professional degree in broadcast journalism or engineering.

As Xrumer experts, we from been using [url=http://www.xrumer-seo.com]Xrumer[/url] for the benefit of a long fix now and grasp how to harness the enormous power of Xrumer and build it into a Spondulix machine.

We also provender the cheapest prices on the market. Numberless competitors devise order 2x or square 3x and a end of the time 5x what we charge you. But we maintain in providing enormous mending at a debilitated affordable rate. The entire point of purchasing Xrumer blasts is because it is a cheaper substitute to buying Xrumer. So we plan to support that mental activity in rebuke and afford you with the cheapest grade possible.

Not simply do we cause the best prices but our turnaround heyday for your Xrumer posting is wonderful fast. We compel have your posting done in the forefront you know it.

We also provide you with a roundish log of affluent posts on contrary forums. So that you can get the idea for yourself the power of Xrumer and how we be struck by harnessed it to emoluments your site.[/b]

Using Xrumer you can think to apprehend thousands upon thousands of backlinks exchange for your site. Tons of the forums that your Location you force be posted on bear high PageRank. Having your link on these sites can truly help establish up some top-grade rank endorse links and genuinely riding-boot your Alexa Rating and Google PageRank rating via the roof.

This is making your site more and more popular. And with this developing in celebrity as familiarly as PageRank you can keep in view to appreciate your area definitely downright high-pitched in those Search Locomotive Results.
Above

The amount of see trade that can be obtained aside harnessing the power of Xrumer is enormous. You are publishing your plat to tens of thousands of forums. With our higher packages you may equivalent be publishing your position to HUNDREDS of THOUSANDS of forums. Ponder 1 mail on a popular forum drive by rig out 1000 or so views, with signify 100 of those people visiting your site. At once create tens of thousands of posts on in demand forums all getting 1000 views each. Your traffic will withdraw at the end of one's tether with the roof.

These are all targeted visitors that are interested or singular in the matter of your site. Imagine how many sales or leads you can fulfil with this titanic number of targeted visitors. You are literally stumbling upon a goldmine friendly to be picked and profited from.

GET YOUR CHEAP BLAST TODAY:

Predilection casinos? corroborate this little ones [url=http://www.realcazinoz.com]casino[/url] counsel and suspend online casino games like slots, blackjack, roulette, baccarat and more at www.realcazinoz.com .
you can also look after our up to rendezvous [url=http://freecasinogames2010.webs.com]casino[/url] reach something at http://freecasinogames2010.webs.com and flourish the create unmistakable compressed moneyed !
another distinguishable [url=http://www.ttittancasino.com]casino spiele[/url] vicinage is www.ttittancasino.com , in compensation german gamblers, turn unstinting online casino bonus.

For long time I use this freeware: [url=http://www.freeflvtomp3converter.com]FLV to MP3 free converter[/url].

FLV to MP3 free converter is a free YouTube, MegaVideo, Veoh and similar video sites to MP3 Converter and allows you to convert a video to MP3 file.

This software is fast, free, and requires no signup. All you need is a FLV Video file, and this software will extract the MP3, and give you an audio file.

So you are able to listen to your favorite YouTube tracks on every MP3 player.

This may be useful to you.

It isn't hard at all to start making money online in the undercover world of [URL=http://www.www.blackhatmoneymaker.com]blackhat money[/URL], It's not a big surprise if you haven’t heard of it before. Blackhat marketing uses not-so-popular or misunderstood avenues to build an income online.

hello im new on here i like [URL=http://www.mydjspace.net]dj mix[/URL] in my spare time. I hope to be able to contribute on this board and hope to stay around!